I have just had a load of tests due to the fact I have been getting lots of palpitations recently. The GP asked if I was under stress- as it is known to trigger them- and yes I guess several things are stressful to me right now.

Then a little while later I was explaining to someone when they started and I realised they began shortly after the time I thought my follow up MRI scan was due last November. I have been getting gradually more stressed since then while trying to ignore it and tell myself all is OK. I had been told after my surgery that I would be getting follow up scans at 6 months (which I did in November 2016), then one after a year, and then 2 yearly after that. If I had several of these stable scans they then may stop them. So in my head I thought I would be getting a scan in November 2017- a year after the previous one.

But I didn’t. In December I emailed my neurosurgeon, and he said the genetics team would be doing my follow up (due to hemangioblastoma’s being linked to the genetic disease VHL -Von Hippel–Lindau). In January I emailed the genetics team. No reply. In February I emailed another person who is in the genetics team (and had previously contacted me about them testing the tumour tissue for the VHL gene), and she called me back saying there was an issue with deciding who should do the follow up MRI, but whatever they were now meeting to sort the problem out and a scan would now be booked!

So I now have a scan date of 4th April. (Which will be 6 weeks short of 2 years after surgery.)

Most of me is OK. If I am calm and relaxed and listening to my body I am sure the tumour is gone. Logic also says that I was told by the surgeon that he removed all of it successfully and there was nothing showing on the 6 month scan, so it is unlikely to grow back. Apparently they can regrow about 20% of the time, but normally only if they were not able to be fully removed or you have VHL- but neither apply.

Yet tests now seem terrifying! I was constantly reassured once before that I was OK, ‘I just had dizziness and that’s nothing to worry about,’ and everyone all but implied that my symptoms were due to anxiety! But I knew something big was up. I even had agreed to the gadolinium dye with the private MRI as I knew I needed them to find the problem and so I had to have it. (I hope that the gadolinium helped them realise the tumour was a hemangioblastoma from the start?) Agreeing to be injected with a toxic heavy metal is rather unlike me…but I think I knew I was dying as I was… (see my info on Gadolinium here)

But despite the reassurances, the worst still happened. The thought of that day when my world went a little numb and I just saw this huge white lump in my brain on the computer screen still makes me rather emotional. There WAS something wrong and I knew it, but ‘oh fuck it’s a brain tumour’. Plus the tears of relief that its now over.

Part of me thought I was having a scan last November, and since then gradually the ‘what if’ thoughts have been building up. Causing me extra stress and palpitations with it. Part of me has felt like it is on ‘pause’, not daring to think about it, trying not to worry and yet failing. Every wobble of bad balance, every wrong word said and every head pain starts to make me worry its coming back, and it isn’t just the after effects of brain surgery. If I get ringing in my ears, even if just for a few seconds and nowhere near as loud, I start to feel physically sick inside.

If it happened once than why can’t it happen again? I finally feel I am getting my strength and even ‘me’ back from after surgery- I don’t want it taken again. Even though I know my attitude and beliefs have changed and I am doing things to actively look after my health. It feels like I am still healing from my brain surgery now, and its 22 months later! I still feel massive improvements every month or so in many different areas.

I also feel that now I have acknowledged what my fear is, I can address it. Release it rather than keeping it bottled up inside affecting me until I listen… and at the moment the palpitations have reduced!

So today I get one of my angel card packs (image below) and choose one card ‘Ground Yourself’. It feels totally accurate, as if I am relaxed and fully in my body I am OK about it all. It’s only when I go into my head and start to imagine and worry that the fears materialise. The card says “this card is a signal that your energy and attention need to be grounded.”

Plus a card almost falls out of the deck as I am shuffling ‘Law of Attraction’. Which says on it “You have the power to choose your thoughts and align them with love, peace and harmony” and “Think about your desires and avoid worrying or complaining”

Ummm… that spoke the truth then! So that’s it. I am now looking forwards to a perfect scan where my surgeon says the area has healed amazingly. 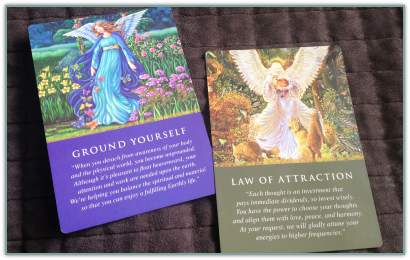