I have avoided toxins for years. I don’t drink, I don’t smoke, I avoid processed foods, refuse mercury fillings, don’t have fluoride in toothpaste, I don’t take conventional pharmaceutical drugs, I am an ex-vaxer…

Yet before I knew a brain tumour was causing my health problems I was told I needed an MRI to find out if I had a rare problem in my brain, or possibly a problem in my spine- and they wanted to use dye for it.

The normal me would have point blank refused it, I knew gadolinium was a heavy metal, and I don’t have injections, but I had been reassured a few times by the doctor, reception staff and then radiographers that the dye was perfectly safe in most people (unless I had any kidney issues) and they didn’t want to have to get me back to pay for another scan with dye as they couldn’t see in one without it. Plus my parents were paying for the scan, so if the one without dye didn’t work and show what it needed to… I couldn’t ask them for another.

In the two days I waited from the private doctor’s appointment to scan date I wanted to look up the risks online, but I could barely look at a computer screen, much less take any information in as the dizziness was so severe looking at the screen made my head spin even more. I was ill, I knew it.

So in the end I trusted that I had to go with what I was told. I HAD to find out what was wrong with me, and to do that with certainty it seemed I needed the dye. So the day of the scan I asked them could they try and do it without and only offer it to me if they felt they needed clarity, which they said they would. Plus the dye cost more money… so I felt I had a ‘valid excuse’ for refusing it!

But after what seemed like 20 minutes or so of lying there in the scanner, with my eyes shut to stop me constantly spinning, they slid me back out and said they wanted to put the dye in. I just had to trust.

I still trust that having the dye helped them see more clearly that my tumour was a benign hemangioblastoma, so that when I got told I had a brain tumour I knew at the same time it was ‘one of the better tumours’ from the start. I might be wrong and the radiographers would have realised without it, but it feels better thinking there was a reason which helped me.

Roll on surgery and a 6 month follow up MRI, and this time I know I don’t want the gadolinium. I cannot see how injecting a toxic heavy metal in my body will help me now. I ask the radiographer as I walked in the room before my scan if they wanted me to have it –Yes. So I tell her I don’t want it. She rather bluntly tells me I ‘need’ it – after all I had a brain tumour and they can see any remaining or re-growing tumour better with the dye. I reply telling her “If it’s so small they cannot see it without the dye then I don’t want to know anyway”. She walks away muttering that as long as I know the risks then it’s my choice.

When I finally saw my neurosurgeon and he showed me the after surgery scan pictures I asked did I need the dye in the future, and he said “No, he could see all he needed without it, the dye just made it clearer.”

Now obviously this may not apply to all types of tumour, (Hemangioblastoma’s are made up of blood vessels and are quite different to many) but for me it meant I didn’t need any more gadolinium!

It never felt right to be injected with a toxic heavy metal without a good reason (a build up must cause some problems in the body?) and I have since found more articles on the dangers of gadolinium

So with my follow up scan’s in the future, unless the benefits outweigh the risks then I am not having any more dye in them

Also, after surgery most days I had been taking the Medical Medium Heavy Metal Detox Smoothie to help me detox, and I still have many of these ingredients several times a week now.   I know he states that having all these ingredients together increase the strength of it being able to remove the heavy metals from the body, and I know I feel better when I take it! I don’t know for sure if it helps, but I do gradually feel the brain fog is lifting. 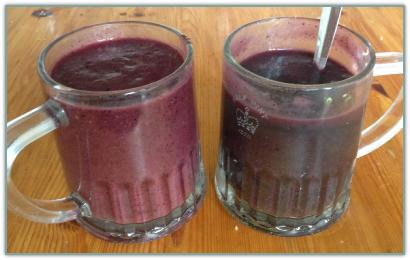