It’s mental health awareness week and so over the last couple of days I have seen various posts on Facebook in support of this, trying to raise awareness that struggling is ok and not a sign of weakness and its actually showing strength to seek help, as well as personal stories.

But a couple of the posts I have read, including one on a brain tumour support group, have had me in tears… bucket loads of tears at how little help and support there really is, and how less stressful tough situations could be with some change. A few stories involved hospitals - giving birth, a family member having surgery, or struggling with a severe health condition and the fact there was just NO support for the person, partner or parent. This person had then gone out of their way to talk - several years later -  opening up how vulnerable and isolated they were, how little help they got (basically none – apart from friends and family) in the hope that their story will possibly support others and also, hopefully, help to change things…

When my children were born and nothing major went wrong, just the attitude towards me was awful, totally undermining me and my instincts- and most of these were by women, but in a seriously misogynistic culture . I wrote this here on my personal Facebook wall on Monday:

“20 years ago today I knew I needed to be where I was about to give birth, I went to hospital after just one (painful and long) contraction and then had no more. When I got there I was put on a machine to monitor me - that was showing 100, but I had no idea what it meant- as I was talking to Dave throughout with only a 'tight' belly feeling ...

A while later he went and moved the car and I got up... To be faced with 30 mins of back to back solid contractions until finally a midwife realised I was in the loo a lot and was in fact about to give birth!  😳

A further 10 mins later Zach was born with his hands up by his head  😬 (probably covering his ears from my swearing!  🤐) while I just sat shaking with shock!

It was the start of me trusting my own instincts ... (And having home births after!  😂)

But 20 years later and others still do not accept instincts are often right ... It feels we have to go backwards to go forwards ... 🤔

I could have added that in that time I was in hospital, I was told I had only just arrived and basically to stop moaning as I couldn’t be in ‘proper’ labour yet as I could walk and had only just arrived, and basically laughed at when I said I needed to be where I was giving birth… but if I had ignored my instincts at the best I would have given birth in the car park! Why are our instincts and feelings ridiculed and ignored? With birth, it is a instinct going back forever… but it seems the doctors and midwives cannot control instinct and so try and medicalise it and remove all power from the mother.

With my other births I felt many decisions were taken without my agreement (and I never had an emergency!) Even with my second home birth the midwife didn’t believe me when I said I was in labour, as again I was walking and talking without ‘regular’ contractions. I had said this is my 4th birth and I don’t do ‘regular’… but she went home anyway. Dave called her back 40 minutes later when I said I had hit transition- and sure enough when she arrived I was almost starting to push and he was born about 10 minutes later!

When this baby was ill in hospital a few weeks later, I was a wreck. It had brought up past bad memories and I was struggling to cope. Not to mention I had to sleep on a camp bed at the side of his hospital cot for a week, waking every short while as my baby was coughing and choking, also struggling with the same cough draining me, trying to pump milk with no support. I had asked if there was anyone to talk to, and there was nothing. No one. Support and help just didn’t exist. The nurses just looked at me as if I had asked for a ridiculous stupid request, not someone to listen… and they wonder why mums have post natal depression, and post traumatic stress syndrome afterwards?!

I have also had other medical ‘treatments’ where a Doctor has literally laughed at my pain and said “What do you expect?”… clearly not understanding anything of what I was feeling.

Then when I knew I had a brain tumour, shown a picture of this lump in my skull by a doctor who was not even a neurologist- it took almost 2 weeks to see the neurosurgeon. Does anyone have any idea about how many horrendous thoughts can go through your head in that time? The GP surgery didn’t even offer me an appointment (not that they knew anything anyway), there was no mention of support phone lines or groups or counselling or anything. I was a wreck… a terrified jibbering sobbing wreck.

Then after this meeting with neurosurgeon, still nothing… just wait for your operation date like a good girl.

Then before surgery- nothing. Although when I went in to theatre and was lying in the pre surgery room, shivering, a nurse saw what a state I was in and held my hand for a while. A human angel.

After surgery, when I just couldn’t cope with the woman in the bed next to me crying and moaning, machines bleeping everywhere, then suddenly being treated for a blood clot … the final straw for me on top of my head feeling like it had been run over by a truck and I was in some parallel universe nightmare… I still managed to walk outside and cry on a chair near the nurses’ desk until the morphine hit and I was almost asleep sitting up. The only person able to talk to me a 20 year old student nurse. I wish I could say thank you to her, I have no idea if she still wants to continue nursing after this? But a girl younger than my son was the only person who wanted to help, who could help, who even had the time to ‘just’ listen. Why is there not a counsellor or the wards after brain surgery? Do they have ANY idea just how terrifying it is being there? For the patient and our family?

Then I was discharged, just 48 hours after surgery ended. I had nothing - apart from a medicine list and instructions to remove the staples at 9 days! No idea what to do to help the pain, the nausea, the pain in my throat, the dizziness, the exhaustion and brain fog. What signs could be a possible problem? What I shouldn’t do? I didn’t even know at this point I had the main nerve in my neck cut- that my head would be numb forever.

Much less any support or counselling, or a former patient who knows what you are struggling with, a helpline number, just an ear to listen …

And just thinking how Dave sat outside the operating theatre for over 6 hours, watching people being wheeled out and past in the corridor outside (including one with a sheet over them!) just makes me so emotional … but he was there the minute I was wheeled out. His voice telling me “You’ve done it Jo” while I was being moved to the special care ward brought me back to my senses. Yet he had to wait on a hard chair next to the lift for all this time during my surgery… no one to talk to, nothing.

We are made to ‘get on with it’, and when we struggle there is no one to even listen. No wonder we are supposedly having a mental health crisis in this country?

Plus today is the two year anniversary of when I was admitted to St George’s Hospital. I had gone there in the morning hoping to get some painkillers for my headaches… and got admitted, and told my operation would be brought forwards. I had not said goodbye to the kids. (I had left before waking them as hoped to be back home soon – although how do you say goodbye to the kids before major surgery?!) This was the day when I didn’t even know if I’d ever go home again, or would have major damage if I did. I don’t know how many emotions went through me that day- but I know I didn’t think than many were possible! So reading mental health stories from others is raw today.

I ended up walking the dog on his daily trip to the park, with the cold wind blowing away yesterday’s sun, just feeling like the weather was doing what I felt like…shifting the old away and releasing. I cried my way around most of it. The wind helping me release the emotions along with the tears.

I have written this releasing the rest… Tears rolling down my face. We need change. We need to talk. We need to support others. If anyone ever wants me, even to just listen … I’m here. 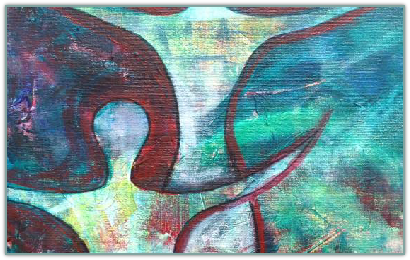