One of my (possibly totally illogical) fears when I knew I would have to have brain surgery was would they shave a large part of my head. I know hair grows back, and it really is a minor part of all that is being done, but I have always had long hair and it’s felt ‘a part of me’ for a very long time. Thinking you might lose it is not something I  wanted to face on top of everything else, when I was  already feeling extremely vulnerable and didn’t want the world to know I was having brain surgery.  Plus my hair hides a multiple of things - and it is probably my defining feature. If it had to be done then I would just have to face it, but I remember asking on a brain tumour group if it was likely they would shave much, as I needed to know. As to cut it all off would be a bit like saying I was going to lose a limb - lose a big part of me - and I would need to ‘get my head around it’! Thankfully they told me that the surgeons normally just shave a small amount either side of where they will cut and minimise any hair loss.

I guess part of my fear of losing my hair was also a memory I had. Recalled vividly while wondering why I had just been called to  go back to the consultant to find the results on the same afternoon I had my MRI. Terrified as to what ‘problem’ they had obviously found. In the drive back to the hospital I just repeatedly had a vision of me as a young child walking up the front footpath to my house with my Nan walking behind me admiring my curly red hair saying “I hope you never have a brain tumour and they need to cut them gorgeous curls off”.

“Is this what I have - a brain tumour? Did she know what would happen? Why on earth did she say this? Am I really going to have my hair cut off?”

I know I was also scared I had Multiple Sclerosis or some other degenerative brain disease, but somehow inside I knew it was a tumour even then. This was going to have to happen…just like my Nan predicted…

I really wasn’t ready to have my hair cut off, but had looked online at ‘back cuts’ before surgery, where they all but shave the back part, near your neck (where I knew my cut would be) so I could keep the top long, this seemed bearable, but how would I predict how much of the area would be shaved in surgery? In the end I decided to leave it until after the operation - partly helped by feeling so ill and not sure I could face the hairdressers, let alone having to wash my hair there and bend my neck over the bowl. My neurosurgeon said he was planning to make a straight cut up the centre back of my head, and would leave as much of my hair as possible -  I could have a back cut after.

As it was he didn't cut a straight line, I have a bump on the centre back of my head which he said wouldn't have been the easiest place to put a plate over afterwards. So I had a S shaped scar instead, starting at my neck and going towards my right ear. I also didn't realise I would be getting a fair sized amount of hair removed at the front of my head - for where the drainage tube would be inserted during and after surgery.

Here are my pictures just after surgery. As you can see the surgeon only shaved a minimal amount of hair for the size of the cuts.

Next - “Vestibular Neuritis and Explanations” 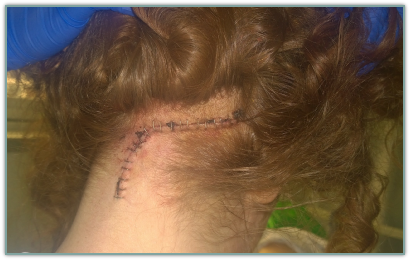 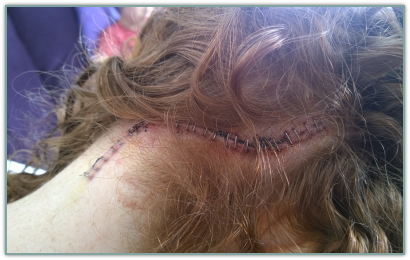 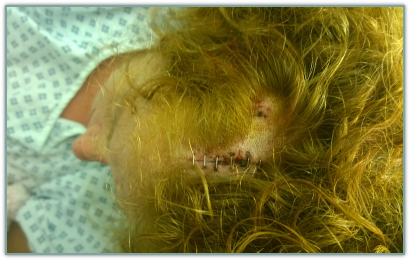 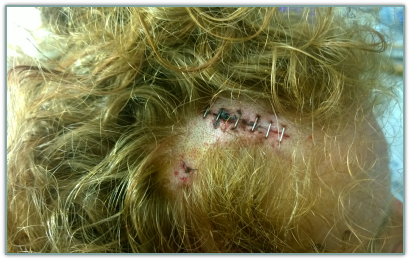 Before surgery I had tied my hair up in a top knot ponytail, assuming they would leave it tied up out the way and still be able to access my head. But clearly this didn’t work as after my hair was simply a glued mess! I looked at myself and thought I looked like a witch, who knows what others thought? It certainly made me look like I had just had brain surgery!

This was the attractive mess I woke to the next morning, and the back of my hair was glued together in a lump, not tied up! The glue gradually unglued itself, but not enough to brush it or even tie it up again neatly.

When I was discharged 2 days after the surgery, Dave and I were told that I could wash my hair from the next day, but he had to do so very carefully for only a short time, avoiding rubbing my head at all and using gentle shampoo. (I only use Faith in Nature shampoo - which does not have SLS as this irritates my scalp and this was brilliant) We were also warned that it would take a couple of attempts at washing to get all the glue out. What we were not told was that when Dave washed it, huge clumps of hair that they had obviously shaved during surgery would also fall out with the glue!

I had only felt up to attempting to wash it 2 days after I left hospital, even then I wasn’t able to muster the energy to lift my hands for long enough to wash it myself , was disgusted with how fake and ‘wrong’ my head felt, terrified I would damage a staple or something as I couldn't see what I was doing. So I sat in a shallow warm bath (I was told not to soak the scar in water) while Dave showered and washed my hair. It oddly felt like a test to see how I could cope, my husband having to nurse me, but one that I knew I wasn't allowed to fail. I managed a few minutes, then these clumps of hair fell out - maybe each only a few centimetres patch from where they shaved me- but my hair was well over 30 cms long! So the amount that fell out seemed extreme. Huge horrid clumps I couldn't feel. It felt like he was touching a wig attached to me, not my own hair. I felt sick and cried. I also hated it when Dave touched my head, I knew he was touching it, but I couldn't feel it properly. I kept asking him how much glue was on my scalp and he said only a little, yet I felt like I had a centimetre thick layer of papier-mâché on it. (It would take me another 3 weeks to find out that the main occipital nerve was cut in my neck, and my head would be numb - see here) Plus I felt insanely dizzy, so all I managed was to sit there with my eyes mostly shut, trying to hold it all together while crying stupidly. After all the clumps of hair and most of the glue had fallen out, I said that was enough and Dave put a towel on my head, helped me out the bath and found me clothes. He then had to gently dry my hair while I felt I could barely stay sitting upright much less hold the hairdryer to my head. I normally dry my hair with my head upside down, but I couldn’t bend my neck from the pain, so he partly left the roots damp as I couldn’t cope with any more. My daughter put my hair in a plait, trying to cover as much of the scars as possible (my 9 year old hated seeing them!) And it stayed like that for a couple of days. 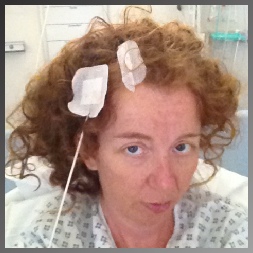 This picture on the left was taken on the 26th May, 8 days after surgery (when my neck muscles really hurt- excuse my face!)

But as you can see even then the scars were hardly visible within the rest of my hair.

In the end I decided against the shaved back cut, due to my scar not being only in the centre at the back and having to shave a too bigger area. But several months later (even after I had got over the fact I would always have a numb side to my head) each time I touched a patch of my hair, or it got caught slightly in my handbag shoulder strap, or I moved my hair at the back, I had this horrid sensation that I was touching a wig as it did not feel connected to my head. Plus it also triggered me far too much in being able to feel the numbness without actually touching my head. Which most of the time I couldn't now feel unless I was either in a cold wind or I touched it. I also had the added annoyance that I mostly tied my hair up - but if I leant on a hair clip it felt like my whole skull had a metal plate inserted in it! I hoped that if I got it cut, by the time it grew back I would have either got a bit more feeling back or just get used to this numb feeling - which I would hopefully get used to better as my hair grew again. I also hated the tufty bit of hair at the front of my head, which as I tied the rest of the top of my hair up- stuck out as it couldn’t be tied.

So in October 2016 - 5 months after surgery -  I got the back of my hair cut to the same length as the parts that were shaved. I simultaneously hated it (I wasn’t me!) But loved it as it did exactly what I wanted - it stopped me constantly feeling the numbness. 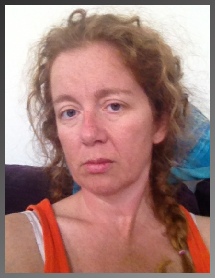 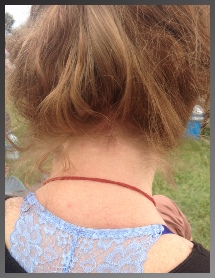 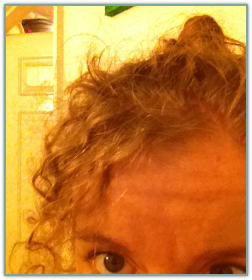 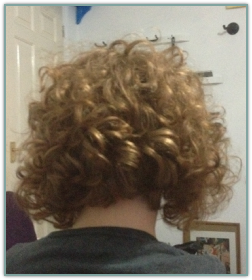 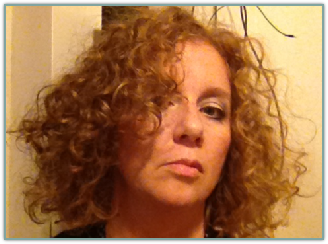 Left: My tufty patch before cutting my hair.

Two years later and my hair length is almost back where it was, although I have chosen to keep the top shorter so I don't need to tie it up - it doesn't get in my way, and I still don’t like leaning on hair clips. I actually measured it 2 years to the day after surgery and it was 13 inches!! - apparently 12 inches is the average growth rate for 2 years. I am back to being ‘me’!

I also feel the numbness far less, I think the area I cannot feel is only a tiny bit smaller when I touch it than it was before my haircut, but I normally cannot touch my hair and feel the wig sensation. I think my body just doesn’t respond to the feelings the same now. So the haircut idea did as I wanted! 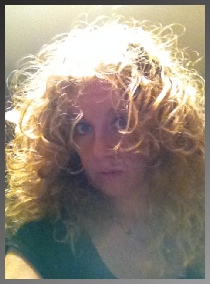 I also read the book ‘Do No Harm’ by Henry Marsh recently. One page which really stuck out about shaving hair was: “There is no evidence that the complete head shave we did in the past, which made the patients look like convicts, had any effect on infection rates, which had been the ostensible reason for doing them. I suspect the real - albeit unconscious - reason was that dehumanising the patients made it easier for the surgeons to operate.”

I am glad our surgeons now realise we are human!