Here for a Reason

“I am digging in the garden, slowly moving the soil with a trowel from the once sloped bank into a levelled flowerbed, and while I am digging I keep seeing a robin who seems to be waiting for me to throw him some worms. But this robin doesn't look like a normal robin, he has barely any redness on his chest and his head just looks like he is missing feathers or is covered in scabs or white patches… he either has some disease or had a very close encounter with a cat?

In fact if he didn't act like a robin I wouldn't really be sure he was one. However, whatever the reason is for his scars 'scabby robin' is just continuing to do what he has to - which I assume is feed babies - and he is in my garden for days, waiting for me to feed him the worms and grubs that I dig out.

I take a picture of him and see if anyone on my Facebook wall has any ideas on why he looks so bad… they don't, but also assume he must still have a nest as he is constantly eating!

"He is eating the worms I have been digging...lots of them! and sitting about 1 metre away (but not when I have a camera)"

As I am watching him again I suddenly feel this, like he was sent here for a reason:

"I'm sure his head and neck has scabs on it so maybe he is 'my' robin. A slightly beaten up around the head with a few scars and war wounds, but alive, robin - just to make me smile :"

… the day after this realisation, scabby robin disappears…

Next - “Weekend of Synchronicity” 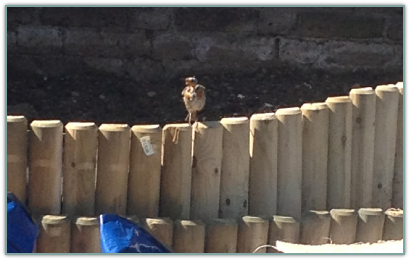